Skip to content
Notice: Congratulations to our Jog-a-Thon winners!

*Check out this awesome article about our school garden published by InsidePublications.org 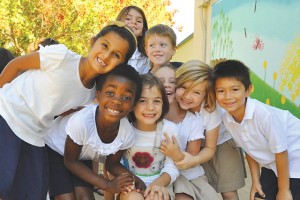 We plant; we sow. We learn; we grow.
That is the refrain heard these days around Phoebe Hearst Elementary School, which has revived a school garden that had lain dormant for many years.

The revival on the East Sacramento campus began in earnest this past fall. Each of the school’s 640 students helped plant a dizzying assortment of starter plants, ranging from broccoli and brussels sprouts to chard and sugar snap peas. The late-autumn harvest was more robust than expected, and students were able to deliver produce to Sacramento Food Bank in time to help fill Thanksgiving boxes—plus sample their spinach crop in a dip made by parent and garden volunteer Holly Whitman. (Only three students refused to try the dish, she says.)

The school gardening movement has taken root both across the nation and in the Sacramento region in recent years as parents, educators and community leaders aim to instill healthier eating habits in young people and connect them directly to the source of fresh fruits, vegetables and herbs. In October, renowned Berkeley chef and restaurateur Alice Waters of Chez Panisse helped launch an “edible schoolyard” at Sacramento Charter High School, featuring a garden, a kitchen classroom and an on-campus cafeteria.

The Phoebe Hearst project is geared toward the school’s kindergartners through sixth-graders and has been underwritten by Selland Family Restaurants, which committed $5,000 over five years and secured an additional $10,000 from corporate sponsors. The restaurant group that owns Selland’s Market-Cafe, The Kitchen restaurant and Ella Dining Room & Bar also boasts a family connection to Phoebe Hearst: Tamera Baker, Randall Selland’s daughter and creative director of the Selland Group, has put two children through the school, including her daughter (Ella) who is still a student there.

Baker’s brother, Josh Nelson, secured the donations for the garden. He is involved in Sacramento’s recently launched Farm to Fork initiative, which hopes to put the capital region on the culinary map. He sees the school garden as part of the larger picture. “Everything starts with kids. We want to get into teaching kids about food,” said Nelson, chief financial officer of Selland Family Restaurants.

Nobody knows when Phoebe Hearst’s previous garden went dormant, but principal Andrea Egan and others at the school at Folsom Boulevard and 60th Street got tired of looking at the abandoned space, which sits on the west side of the classrooms. They did some experimenting during the previous school year and stepped things up once students returned to class in late summer.

Four wine barrels make up the garden’s  “dwarf orchard.” Parent volunteers say they chose trees that would catch students’ fancy, such as a turkey brown fig and a bacon avocado tree. The final feature: a wedge-shaped butterfly garden, planted with lamb’s ear, yarrow, sticky monkey flower and others. The school is applying to the California Department of Fish and Game for a grant to create a larger native-plant garden.

Egan and her parent volunteers call the school project “an outdoor learning lab,” one designed in part to teach young people that their fruits and vegetables don’t come only from the grocery store. There are countless other lessons at work, too. “The garden is such a valuable tool for learning,” said parent Hillary Johnson. “It gives the kids more responsibility and builds a sense of teamwork.”

Fifth-grade teacher Craig Burkhouse has had plenty of gardening experience with his students over the years. Prior to joining the Phoebe Hearst staff in 2011, he took his students from Abraham Lincoln Elementary School to Soil Born Farms in Rancho Cordova several times a year.

Burkhouse is amazed by how quickly the Phoebe Hearst garden has turned around. The beds were “absolutely hideous” before the renovation began, he said. He is impressed with the effort. “They came in and just knocked it out of the park. I’m blown away,” he said. “The growth from this is more than I expected.”

Unseasonably warm weather meant that many of the classes at Phoebe Hearst not only worked in the garden this fall but also spent time doing schoolwork outside. Burkhouse’s own students come often to the garden, journals in hand, to practice “single-spot observation”: viewing progress from a single vantage point and writing about the changes over time.

Fifth-grader Josephine Minnick says she, for one, didn’t expect she’d see much change but was pleased to be proven wrong. And classmate Sam Robinson’s journaling has yielded a celebrity: Figsworth, the nickname he gave the young fig tree early in his observation. Robinson has tracked the tree’s growth, noted when one of the four figs fell off and stops by on his own time to pull weeds. Figsworth caught on quickly. “It’s very popular in my class,” he says. “Everybody knows the Figsworth thing.”

Parent Holly Whitman is delighted with the garden’s success for many reasons, but one stands out above all. “No matter how plugged in (our children) are, there’s no iPhone app or fake garden that replaces what you actually put in the dirt,” she said. “It’s so magical to them. It thrilled me to learn that.”

Jan Ferris Heenan can be reached at jfhwrites@gmail.com.

Support the many programs that PTO funds like art and music, classroom enrichment, technology and school field trips. Donate now.